This Time We'll Get it Right

Noted physicist Albert Einstein once remarked that insanity consists of doing the same thing over and over and expecting a different result. The good professor certainly knew a thing or two about the space-time continuum; turns out he had some insight into modern-day central banking as well.

In our Weekly Dispatch published July 20th (Japanification), we pointed out that global central banks, along with their national governments, have over many years followed in lockstep the policy decisions of the Japanese banking and national authorities. Although negative interest rates (NIRP) originating in Japan have yet to appear in North America, such policies are common in Europe and, despite evidence to the contrary, are believed to have a beneficial effect

Which brings us to the Federal Reserve and Fed chair Jay Powell’s speech last Thursday. Despite what many analysts think, there isn’t much the Fed can do at the present time except wait and see what happens. Monetary conditions remain extraordinarily loose in the face of the ongoing pandemic, while inflation remains stubbornly low. For many years now, global central banks have attempted to push inflation higher using a variety of policy tools, such as negative interest rates, bond yield management, inflation targeting and the like. All have failed spectacularly. Yet they keep trying, and the Fed is no exception.

The Fed is taking another shot at boosting inflation, despite its failure in large part to do so over the past twenty-odd years. (That little bit of green 2004-2008 reflects the housing boom of the era). This time the Fed is looking at Average Inflation Targeting (AIT) as its preferred tool to boost inflation. Essentially the Fed wants inflation to average 2.0% over time, with occasional overshoots.

The issue is that the Fed has had an informal target of 2.0% for several years now, and inflation has consistently undershot that level. Mr. Powell came up with a number of reasons why inflation has remained low, the main reason being that the Fed moved “too quickly” in “normalising” (raising) rates in recent years. Well, perhaps.

The intent appears to be that the Fed will abide higher inflation provided there is accompanying job growth. In practical terms this implies endless monetary policy accommodation and Mr. Market lost no time in whacking the US dollar, which ended up the loser on the week.

In these late summer days, there were some economic measures of note. Not surprisingly, low mortgage rates spurred strong home sales in both new and existing homes in July. The latter actually saw the highest level of sales since 2007, with median prices edging over $300K USD for the first time ever. 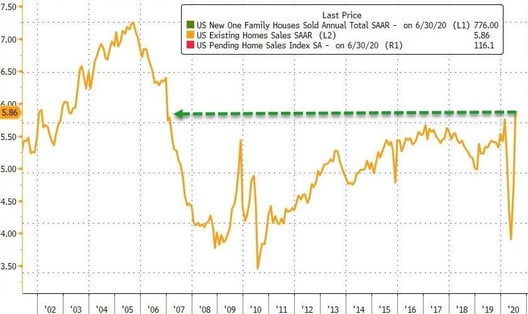 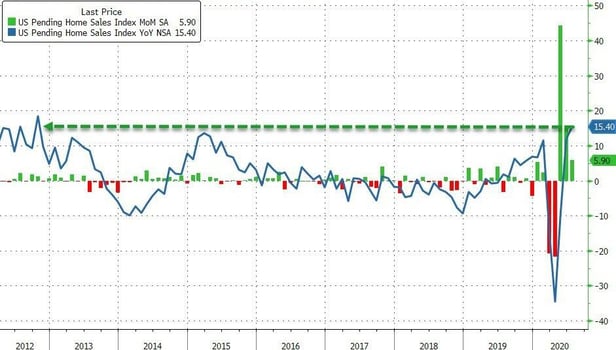 With mortgage rates set on a spread over 10-year and 30-year treasury yields (currently around 0.74% and 1.52% respectively), it’s little wonder many are taking advantage of generational mortgage rate lows and purchasing homes.

It should come as no surprise, then, that lumber prices have soared in response. Between furloughed workers sitting at home and deciding to do some renovating and the demand for new housing stock, lumber – an essential element in house construction – has seen strong gains. Ironically, many West Coast lumber mills pared back operations last March with the virus scare and are now scrambling to catch up with burgeoning orders.

(Fun Fact – Lumber is quoted in board feet which, despite its name, is a measure of volume, not length. A board foot measures 1 foot by 1 foot by 1 inch, or 144 cubic inches. This is the basic unit in lumber trading). 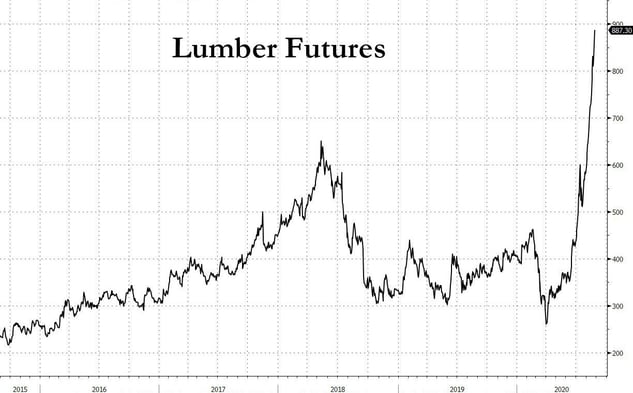 The weekly Jobless Claims number was mixed last week, with a decline in the number of benefit-seekers but the total still over 1KK. In recent weeks the curve has flattened but still appears to have a small downward bias. 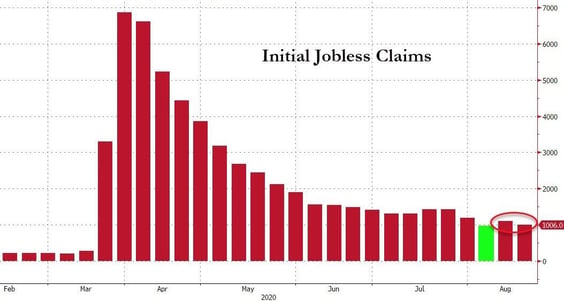 Ordinarily at this time of year, the weekend before Labour Day, we discuss the annual Jackson Hole confab of central bankers held annually in the great state of Wyoming. However, with this Covid-19 business still dragging on, the meeting this year was held via Zoom, a poor substitute, as pixels on a computer monitor are nowhere near as attractive as the stunning vistas of the Cowboy State.

The coming week sees the all-important employment metrics for both Canada and America, some secondary statistics, and a dash of Fedspeak.