“Slip slidin' away. Slip slidin' away. You know the nearer your destination. The more you're slip slidin' away.” These words are the opening verse of the 1975, Paul Simon song Slip Slidin’ Away. Of course, he was singing about fleeting love, but the song title reminds me of our current situation – slipping confidence, fleeting hope, and a slowing economy.

Since my last note, the Federal Reserve surprised the market with a 75 bps hike on June 29th. Last week, it was the Bank of Canada’s turn and they decided to up the ante with a 100 bps hike, the biggest one-time increase since August 1998. The BOC decided to front-load the path to higher interest rates sooner so that they could reach their terminal rate quicker and stated that interest rates will need to rise further. This is an important point being made here by the Fed and the BOC, which other central banks may soon follow in order to get a leg up on the inflation fighting front.

Last Wednesday’s US inflation print of 9.1% was the third month in the past four that the monthly increase was 1.0% or more. This caused the market to price in a 60% chance of 100 bps hike later this month instead of 75 bps (front-loading hike theme is at play here). However, that’s not all that the market priced in. Mr. Market determined that the more aggressive the Fed is in the near term, the more likely it will "break something" (causes a recession) and be forced to reverse course. Thus, the implied yield of the December 2023 Fed funds futures contract dropped 65 bps below the December 2022 contract, which means that the market expects a 50 bps rate cut and a 60% chance 75 bps cut by the end of next year. 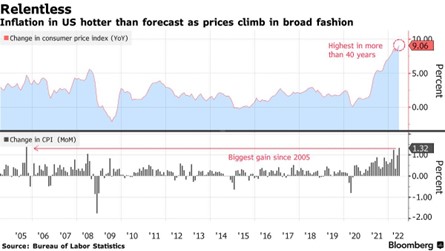 US bond yields were moving up as the Fed was raising interest rates in response to higher inflation. However, bond yields look like they peaked in May. Why are they falling now? The reason is two-fold. Firstly, the market is now convinced that the Fed has regained its inflation fighting credibility – it will do what ever it takes to bring inflation down. Secondly, the market is convinced that growth is slowing rapidly, that’s the slip slidin’ away thing. 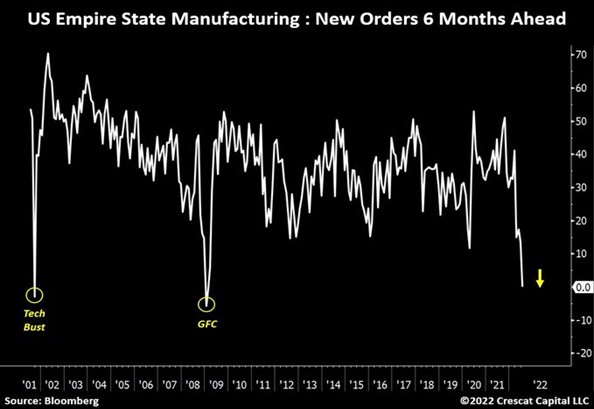 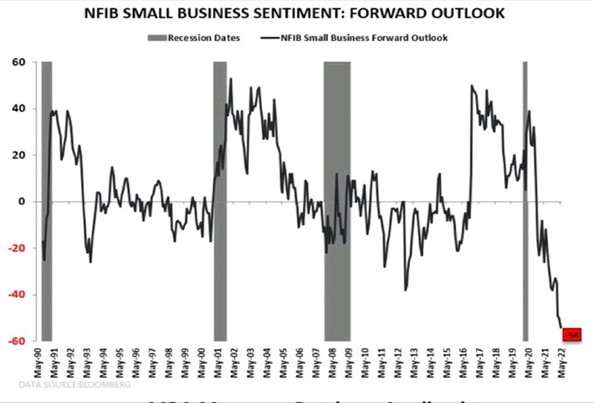 I could have picked any forward-looking survey data, they basically look the same, the rate of change is falling into recession level readings.

So, if US yields are falling and the economy is slowing, why is the USD still rising? I have 13 trillion reasons why, I’ll explain. If the US economy is slowing that means, there are less USD being sent abroad to purchase things. Those foreign economies are not exporting as much so their USD receipts are going down. Most of these foreign countries and companies has $13 trillion USD loans outstanding that still need to be serviced no matter what. With less money coming in, foreign countries and companies need to buy USD in the open market in order to service their debts. So, there is this consistent bid under the USD when the global economy slows down. Remember, I wrote about the USD Wrecking Ball two months ago. Since then, the euro has traded briefly below parity for the first time since 2002. Meanwhile, the yen has fallen to its lowest level in 22 years. 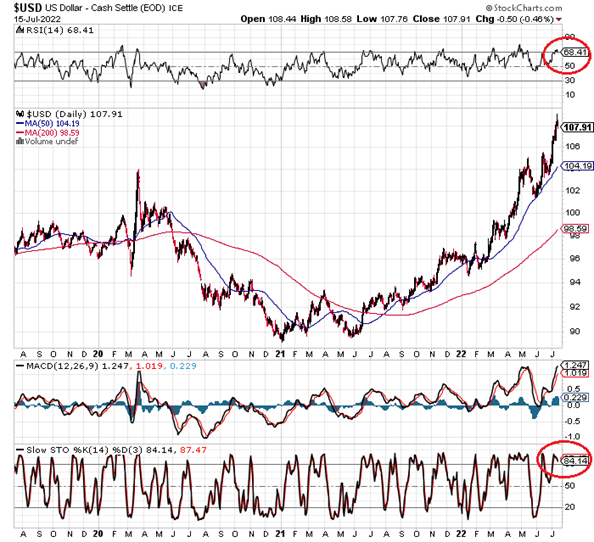 The US dollar index has advanced for three consecutive weeks and for six of the last seven weeks. It is due for a pause and on Friday it did manage to pull back after St. Louis Fed President Bullard and Governor Waller, two noted Fed hawks, poured cooled water on the possibilities of a 100 bps hike at the next Fed meeting. The market pulled back the probability to 20% after it reach 60% after Wednesday’s terrible inflation report. The chart technical are flashing warnings signs as the RSI and slow stochastic appear to be rolling over, while the MACD looks like it is ready to turn over.

In the week ahead, the spotlight turns to preliminary flash PMI for the latest look into the global manufacturing slowdown. Inflation reports for the UK, New Zealand, and Canada will show the market whether to expect more front-loading hikes from the respective central banks. Lastly, the central bank spotlight will move to the ECB and Bank of Japan as they make policy moves. No move is expected for the BOJ since their inflation rate is only 0.8%. For the ECB, this will be the first hike in about 11 years so the magnitude of the hike and the forward guidance will be important. 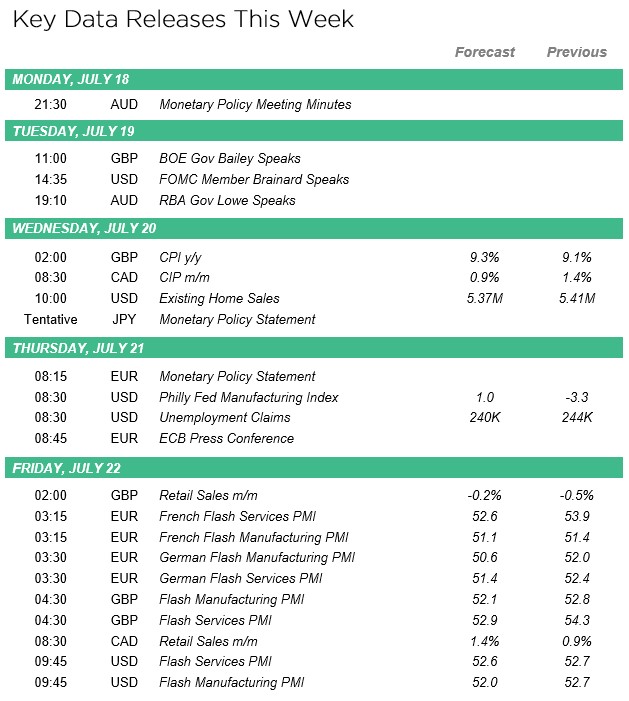