In any other year, the UK’s pound sterling would be the toast of the forex market. If we take away the swoon in the currency due to Covid in March and April of last year, then the GBP has gone straight up since Boris Johnson was elected Prime Minister in July of 2019. He has steered the country through Brexit, the fiscal response to Covid, and the vaccine rollout. The GBP is at a 3-year high as the country’s rapid vaccine rollout and its strong savings rate fuel hopes for a strong economic rebound.

This has led markets to push back bets for a Bank of England interest-rate cut to next year, despite market chatter about the central bank exploring a negative interest rate policy. Year to date, the GBP is leading all the major currencies against the dollar this year with a gain of 1.38%. However, this is not like any other year, as the global economy grapples with new Covid variants and continued lockdowns. The major talk in the forex market remains about the USD and its status as the global reserve currency.

Two weeks ago in this newsletter, I outlined my case for a countertrend rally for the USD within its medium-term bearish downtrend. The main reason underpinning my thesis was the developing economic divergence between the US and Europe. That rally was interrupted last week by the disappointing US January employment report, which caused the US dollar index to fall from Friday to Wednesday. The mini slump has played itself out; the market is back on track with the divergence theme as the stimulus bill is working its way through the legislative process. Let me point out that the $900B stimulus that was approved in December and the $1.5T that is being worked on now is way more fiscal spending than any other country. In fact, the next closest stimulus offered by any other government is the $800B European Recovery Fund, which won’t even start to be administered until mid-year. 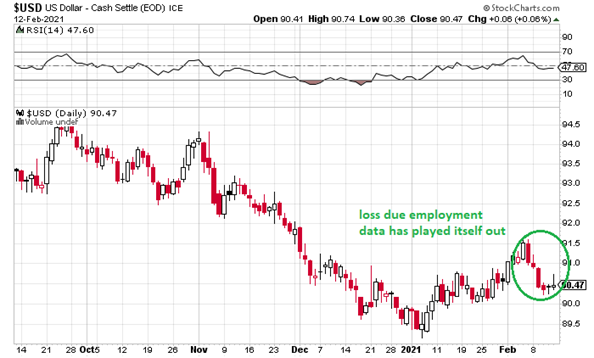 If the dollar index can move above the 91.5, then the divergence theme should pick up steam again. It would take a move below the low of 89.17 in early January for the dollar to resume its bear case.

The pending inflation pick up or reflation trade has been part of an intensifying debate in financial markets in early 2021. It can be seen in the increase in inflation expectations as shown below. Last Wednesday, the US January inflation report was released, showing that the inflation rate was unchanged for a second straight month. The core consumer price index, which excludes volatile food and energy costs, increased 1.4% from the prior year, while the broader CPI advanced 0.3% from the prior month and 1.4% from a year earlier. Despite the tame January figure, price pressures are set to firm in the months ahead. Pundits argue that the stimulus bill being worked on now will induce a pickup in demand as more people are vaccinated against Covid. 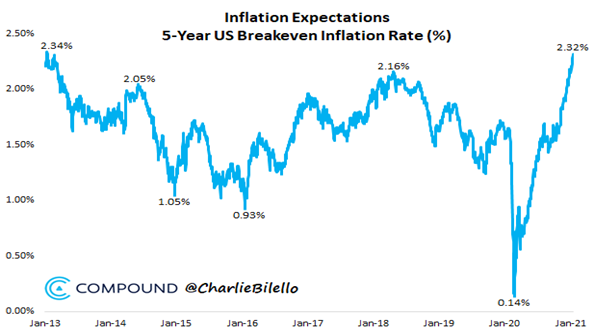 My only question is: if inflation is so tame, then how do you explain this dichotomy of rising commodities and home prices?

Speaking of dichotomies, here is another one. Stock markets are making all time highs while the number of people without a job remains at record high levels. 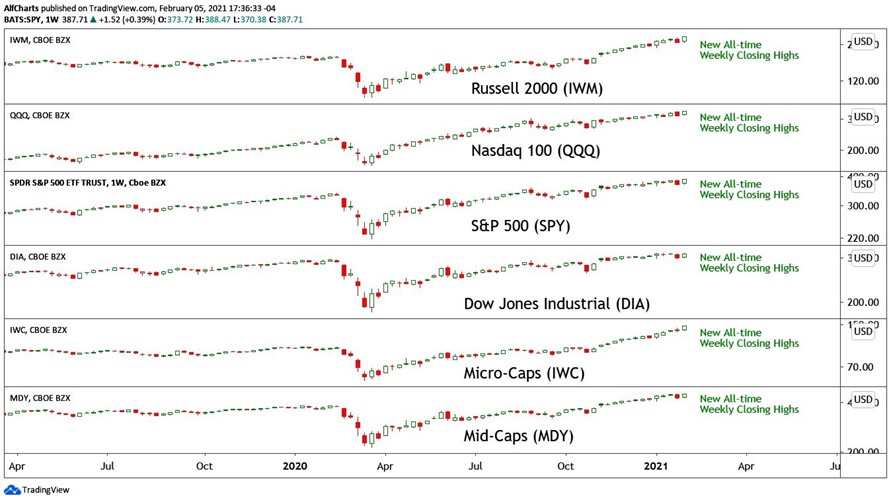 When I look at this graphic, I can’t help but to ask myself, are we in a bubble? Famed money manager Howard Marks, Co-Founder and Co-Chairman of Oaktree Capital Management, was asked this question last week and he did not think so. He believes the market rally is a by-product of the Federal Reserve’s actions:

“A bubble connotes unreasonable optimistic psychology and a belief that there is no price too high for the bubble asset. I don’t think that is going on today, I just think that all prices are up because all demanded returns are down. Prospective returns are low across the board. The continuation of markets at these levels is contingent on continuing low interest rates.”

Mark Cuban was also asked this very question, but he had a slightly different take. He believes that we are in a bubble and that it has been induced by the Fed. In the years leading up to the dot.com bubble, interest rates were in the 5% range. That bubble was caused by investors piling into stocks and not by Fed policy. Fast forward to today, with interest rates near zero, investors have no choice but to seek a higher return, so they are buying everything.

Judging from what we heard last week, the bubble is set to get even bigger. Last Wednesday, Fed Chairman Jerome Powell called for a “society-wide” commitment to reaching full employment, calling for “contributions from across government and the private sector.” He said getting people back to work would require “continued support from both near-term policy and longer-run investments.” He also dismissed concerns about debt, saying the focus needs to be on the economy’s immediate needs.

But the Fed isn’t the only culprit: the US government is also a problem. US Treasury Secretary Janet Yellen agrees with Powell. At last week’s G7 virtual meeting, Yellen stressed “the importance of providing further fiscal support to promote a robust and lasting recovery", which means that "the time to go big is now" and that the "G7 should be focused on what more we can do to provide support at this time". In a nutshell, Powell is handing the US Treasury a blank check by encouraging the administration to spend, spend, spend and not to worry about the debt because the Fed is going to monetize it with QE.

With this in mind, Tesla’s announcement that they bought $1.5B worth of Bitcoin as a treasury reserve asset last week should not come as a surprise. In their 10k SEC filling, they stated:

“In January 2021, we updated our investment policy to provide us with more flexibility to further diversify and maximize returns on our cash that is not required to maintain adequate operating liquidity [...] We may invest a portion of such cash in certain alternative reserve assets including digital assets, gold bullion, gold exchange-traded funds and other  assets as specified in the future.” 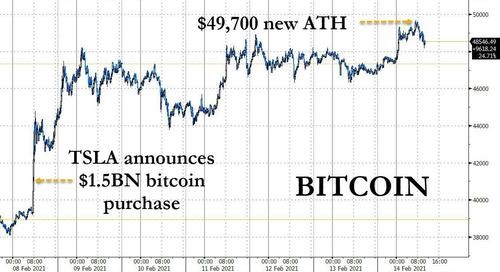 In other words, investors and corporations are shorting both the Fed and the US Treasury. 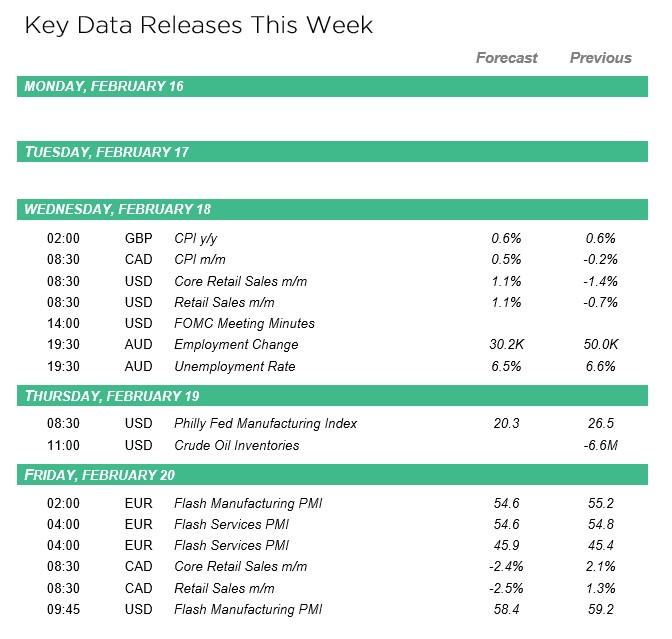