Judging by the weekly performance chart the action was on opposite ends of the earth, however, there were a few other developments developments in between that we will explore.  The NZD was the largest gainer on the week due to last week’s strong trade surplus and increased milk payout forecast from Fonterra. Milk is New Zealand’s most important export so the NZD received a boost after Fonterra lifted its forecast milk price for the current season by 15 cents to $6.15 per kilogram of milk solids on the back of strong world dairy prices.  Also spurring the currency higher was news that New Zealand trade surplus widened for second straight month after 8 consecutive deficits.  What made the report particularly positive was the fact that dairy was not the only sector that saw gains, exports of logs and wine also increased significantly.

Sadly, the terrorist attack in Manchester England and the country’s escalated terror alert level weighed on the GBP.  The slowing of the economy and the tightening of the election polls also contributed to the currency’s weakness.  Q1 GDP growth was revised lower and loans for house purchases eased.  While this is noteworthy, the more important factor right now is politics.  The UK is two weeks away from national elections and Prime Minister May has managed to turn it into a close contest, after a series of missteps over the past few weeks have turned public opinion against her.  Last week started with rumours that the UK could walk away from Brexit negotiations if it is forced to pay $100 Billion divorce settlement to the EU.  With this in mind along with the EU’s hard negotiating stance, May needs to win a supermajority in Parliament so that she could have a strong hand in Brexit negotiations.  Bottom line, she needs to up her game over the next two weeks. 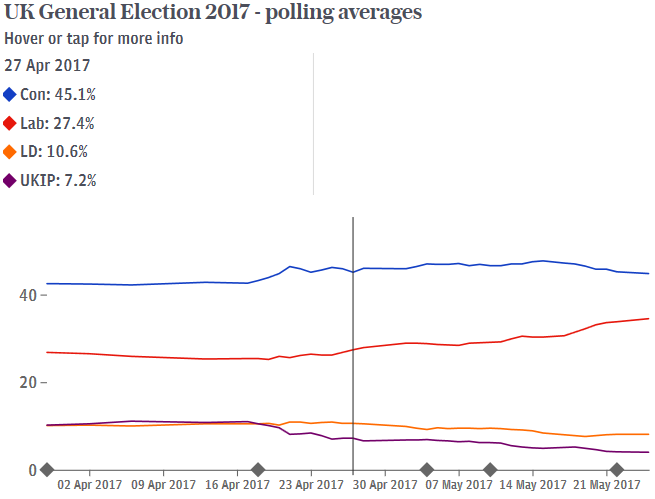 Reserve minutes from the May meeting and the Bank of Canada’s policy announcement.  In short, the FOMC minutes revealed that policymakers are not 100% set on hiking rates at the June meeting.  In contrast, the BOC statement hinted that policymakers are growing more optimistic about growth.  This caused a nice rally in the CAD against the USD last week which left the CAD up by half cent at week’s end.

Not too long ago, a Fed hike in June looked like a fait accompli however a recent bout of soft data has clouded the picture.  The minutes showed that most policymakers wanted to hike soon but generally agreed that it would be prudent to make sure the recent slowdown in growth is only a blip (transitory) before hiking again.  Remember, the minutes are from the May meeting which occurred before the recent soft retail sales and inflation report.

Meanwhile, across the 49th parallel, the BOC stood pat this week holding rate at their historic lows of 0.50% but managed to pull a balanced assessment of the economy. While recognizing the threats of a housing bubble that has been fuelled by speculators, there is still slack and opportunities going forward.  This is an important turn around for the BOC because they were pessimistic early in the year even though they were blessed with strong economic data.  In this announcement, instead of continuing to brush off the strong data, the BOC changed tack and acknowledged improvements in housing, consumer spending, jobs and business investment.

Furthermore, the BOC statement said the neutral stance was 'still' appropriate but that time qualifier shows it won't take much more to tilt the balance to hawkish.  Having said that, the BOC struck a clear hawkish tone when it said the following:  "The Canadian economy’s adjustment to lower oil prices is largely complete and recent economic data have been encouraging, including indicators of business investment."

News that OPEC extended its production cuts for another 6 months will help to put a floor under crude and in turn help stabilize the CAD.  If this week Canadian GDP report comes in better than expected then the CAD has a real chance to get back above the 0.75 level.  If it disappoints, then the CAD could slide back to 0.7350 area.

Semper Idem – it always boils down to the same question; taking these developments in stride, does it indicate that the bullish move in the USD is over?  This question is hard to answer considering that the divergence of monetary policy hasn’t yet begun – the ECB and Bank of Japan have not changed tack yet.  Thus, instead of going down, may be the USD will just not rise or distance itself from the rest of the pack.  We will get a test of this theory with this Friday’s release of the non-farm payrolls.  If the non-farm payrolls increase, the unemployment rate holds steady, and average hourly earnings rise at last month’s pace or better, the uncertainty about the Fed’s minutes will fade, leading to a strong USD rally. However if it disappoints, investors will start to unwind their long USD trades ahead of the June FOMC meeting.