The past week saw little in the way of hard economic statistics save for North American trade balances and Canada jobless numbers (more below), but was instead dominated by politics and developments in trade issues – nowadays usually the same thing.

To begin, let’s review the Canadian employment results released last Friday. The domestic economy recorded a net loss of -7.5K jobs vs the call of +17.2K jobs. That was disappointing enough, but the breakdown was worse: Full-time -31.0K / Part-time +23.5K. Wages rose a brisk +3.9% vs analyst’s call of +3.3% and that is a very good number. The loonie initially sold off, then rallied and finally settled back at its opening level as Mr. Market decided to wait and see. A rate hike by the Bank of Canada on July 11th is still on the table, at least for now, but traders are currently paying heed to ongoing trade issues affecting the Dominion.

Both Canada and America reported an improvement in their national trade balances, spectacularly so in both cases. The Canadian April balance came in at    -$1.9bln, well below the previous -$4.1bln and beating analysts’ call of -$3.3B. Stateside the April monthly trade gap declined sharply to -$46.2bln from the previous -$49bln and was well below the consensus call of -$50bln. Whether or not this improving American trend will continue remains to be seen, as the USD has been rallying of late and a weak greenback certainly spurred exporters – which is usually the idea!

Market players were well aware of the G7 meeting being held last Friday and Saturday in the Charlevoix region of the province of Quebec, a sylvan area northeast of Quebec City. Tensions over trade issues amongst the participants are well-known and, frankly, appear intractable. At the time of writing, little had emerged from the high-level meetings but several things can be predicted with some confidence: US President Donald Trump will use his customary – and somewhat effective – negotiating tactics learnt in the rough-and-tumble of Manhattan real estate development; both Canada and the European Union will tut-tut the Americans and resist any change to their currently very profitable trade relationships with America; and the final communique will stress that differences are manageable and that all members remain committed to continuing the alliance and so on. But make no mistake, Mr. Trump is aiming for some serious changes in the near future.

An obvious first target is NAFTA, which should come as no surprise to anyone. Mr. Trump has made threatening noises about revoking the deal first signed in 1994, and has proposed negotiating new separate deals with co-signatories Canada and Mexico. As Canada and America inked the original Canada-US deal in 1988, and that agreement has worked out largely to the benefit of both parties since then, this may prove a fruitful approach, at least for the True North.

The above are a selection of several tweets posted by Mr. Trump prior to the G7 confab. On the issue of dairy products he has a point, but virtually all advanced countries including the G7 protect their domestic producers. More to the point is how Germany has used both the DM and the EURO to become an exporting powerhouse, leaving all other European nations – and just about everybody else - far behind. 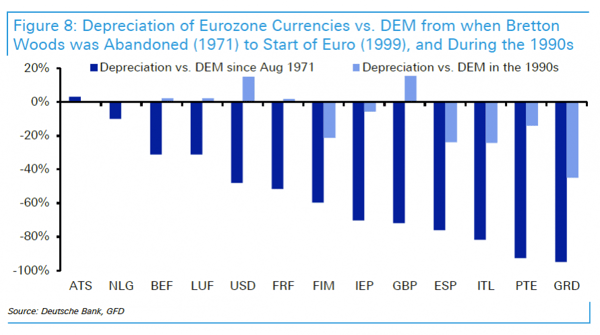 It should be clear from the above graph that Germany has beaten all comers in the exporting game, be it with the EUR or the rock-solid Deutschmark. Some analysts speculate that creation of the EUR was to obviate these differences between European nations, but the German people are so naturally inventive and productive, and German-made products of such high quality and in such demand, that the EUR by default is a strong currency. And that is a major source of tension within the EU. Countries such as Greece, Italy, Spain and Portugal, lacking the ability to devalue their currencies to spark their domestic economies, are forced to tolerate sub-par growth – in Italy’s case, nil since 2008 – while German factories work flat-out exporting German products all over the globe

The recent election of populist, Eurosceptic parties in Italy and Slovenia and the respectable showing of such parties in elections in EU bellwethers France and Germany indicates that, like America and the UK over Brexit, the liberal globalist agenda may have met some serious resistance amongst those most directly impacted, i.e. the voters. Symptomatic of this is the growing voter ire over the (apparently) unlimited acceptance of Middle East refugees mandated by Germany. Italy, the third-largest EU member, recently called a halt to illegal migration to the country.

The upshot of all this is that the whole postwar scenario has changed, irrevocably. Which brings us back to Mr. Trump and the G7 summit. Many commentators have accused Mr. Trump of recklessly shattering the old postwar political and trade relationships, but the liberation of Eastern Europe in 1989, collapse of the USSR shortly afterwards and the re-emergence of Germany in recent years as a regional bully (as it was prior to 1945) should be sufficient evidence that major change was already happening, regardless of Mr. Trump’s antics. He may, in fact, be pushing the whole thing forward.

One of this week’s notable events is the two-day FOMC meeting June 12th and 13th, with a hike in the fed funds rate to 2.0% virtually guaranteed. The following day sees a rate decision from the European Central Bank. Aside from these two major risk events, America has a heavy data week while Canada, by contrast, sees very little.