Despite trade wars, loose global central bank policy, inversions in the yield curve, slowing corporate earnings growth, and presidential tweets, the stock market and the USD have found renewed support. The USD managed to gain against all the major currencies last week and the US dollar index cleared the 99 level for the first time since May 2017. In this risk-on environment, it isn’t surprising that the safe-haven funding currencies with the lowest interest rates, the euro and Swiss franc, have sold off the most. The CAD outperformed all the currencies except the USD, but its fate will be determined by Wednesday’s Bank of Canada announcement. The weakness in the New Zealand dollar also caught our eye this week.

The New Zealand dollar fell to four-year lows, breaking below the 0.63 level after some disappointing data releases last week. Business confidence in New Zealand dropped to its lowest level since 2008 and weaker building approvals data for the month of July. Let’s not forget that the central bank, the Reserve Bank of New Zealand, already surprised the market with a 50 bps cut in interest rates in early August. The trade war between the US and China has caused the Chinese economy to slow down and the New Zealand economy is heavily dependent on China to buy its products. It’s surprising to some, however, that the NZD has weakened so much more than the Australian dollar. Both economies are heavily dependent on exports to China, but Australia’s exports are the hard commodities, while New Zealand’s exports are the soft (i.e. food).

Many believed that a slowdown in China would be a bigger drag on the AUD rather than the NZD; people have to eat, thus New Zealand’s exports would be less affected. This may prove true in time, but right now it’s the NZD taking the bigger beating.

New Zealand and Australia, not unlike other economies, are feeling the effects of battles being waged by their allies: US trade wars (most notably with China) and in the UK, the dreaded Brexit.

At this juncture, there is no doubt that the markets are leading the US Fed. Chairman Powell framed its first rate cut in 11 years as a “mid-cycle adjustment to policy” rather than the start of a more aggressive cycle of monetary easing. Powell’s biggest critic, Trump, is facing re-election amid a protracted trade war with China. Trump tweeted March 2, 2018 that “trade wars are good and easy to win” and frequently claims that “China wants to make a deal, very badly”. 18 months later, the trade war continues to wage with little in the way of negotiations and escalating “tit for tat” tariffs. As the consequences continue to ripple through the world economy, it’s difficult to predict what will happen next or how it will affect the markets or the economy, so more volatility may be in the forecast.

Newly minted Prime Minister Johnson’s most recent maneuver was to seek a parliamentary prorogation, asking the Queen to suspend parliament from September 12 to October 14 (she obliged). This will limit the Parliament’s ability to challenge his plan to take the country out of the European Union in nine weeks, with or without a deal. This move will probably be challenged in the courts but if Johnson is successful, his gamble may pay off. The EU would then have to renegotiate the terms of the deal if they want to avoid a no-deal Brexit.

Let’s review the possible Brexit outcomes with the help of this flowchart and corresponding probability calculations, courtesy of Deutsche Bank: 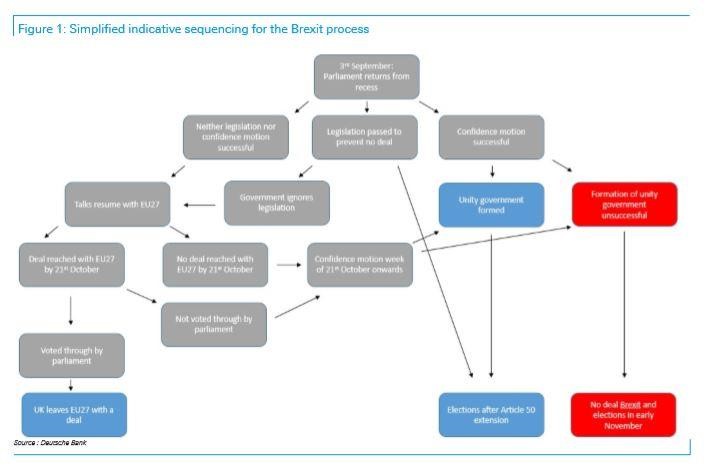 Despite the Labour Day long-weekend, this short week is very data heavy. China’s manufacturing PMI is on tap, and if it manages to get back above the boom/bust level of 50 the market will likely continue its risk-on move that has helped the USD and equities to rebound. In the US, we have the US ISM manufacturing report and the jobs report at the end of the week which will help set expectations for Fed policy. There are also three central bank meetings for Australia, Sweden, and Canada.

On Friday, the Canadian GDP report showed that the economy expanded at a surprisingly strong annualized rate of 3.7% in Q2, a pace much higher than the Bank of Canada had predicted. However, business investment declined and growth in consumer spending slowed. Well-known Canadian economist, David Rosenberg, didn’t sugar-coat things: “Canadian GDP number masked a renewed contraction in real final domestic demand — slipping in 3 of the past 4 quarters. Bank of Canada won't be on the sidelines for much longer. Sell the loonie!”

On the other hand, National Bank of Canada economist Matthieu Arseneau said that “unless the trade conflict between the United States and China escalates further, there is no need for monetary stimulus in Canada.”

As you can see, opinions are split on the timing of interest rate cuts by the Bank of Canada, but this Wednesday’s meeting is not about a rate cut but rather its bias. At the moment, Norway and Canada are the only central banks that haven’t changed their monetary bias from neutral. If the Bank of Canada chooses to lay the groundwork at this meeting for an October rate cut, the currency may break its narrow trading range of the last couple of weeks and weaken through the 1.3350 level against the USD. Keep in mind, there is a federal election on October 21 and the next BOC meeting is on October 30th. If the central bank does the opposite and conveys a message of solid growth for the rest of the year, then the CAD could strengthen back to the 1.30 level. Either way, we will have our answer on Wednesday.