Some might think the title of this letter refers to the upcoming opening of the major league baseball season (March 29th, early by usual standards), but we are actually referring to Fed chair Jerome Powell and his first time at managing the FOMC through a rate decision.  Plenty of other stuff happened too, and the USD – to use the technical term – got whacked, ending up the loser on the week.  Take a look, shall we?

To begin, Jerome H. Powell replaced Janet Yellen as Fed chair earlier this year.  Unlike his predecessors, he does not have a degree in economics but rather trained as a lawyer.  A long background in investment banking and a stint in the treasury department of George H.W. Bush’s administration, followed by further work in the private sector led eventually to his nomination to the Fed board in 2011 and full appointment to the FOMC in 2013.

This, then, is the man who will oversee interest rate, bond purchasing and money supply operations in the world’s largest and most vibrant economy.  It behooves all market players to heed his words.

Which brings us to the Fed rate announcement last Wednesday, wherein the Fed raised the overnight rate to 1.50 – 1.75%, a quarter point as expected.  Our learned colleagues Dr. Long and Mr. Short carefully parsed the text of the FOMC announcement.  Initially they felt the Fed had downgraded its near-term economic outlook, using the term moderate as both adjective and verb e.g. "…economic activity has been rising at a moderate rate" or in another section "Recent data suggest that growth rates of household spending and business fixed investment have moderated from their strong fourth-quarter readings."  The takeaway appears to be that three hikes are done for this year, but the so-called dot plot indicates that 7 of 15 officials now favour four hikes this year.  Our colleagues summed up the FOMC bottom line thusly:

So how did the guys in the Chicago trading pits react to all this? 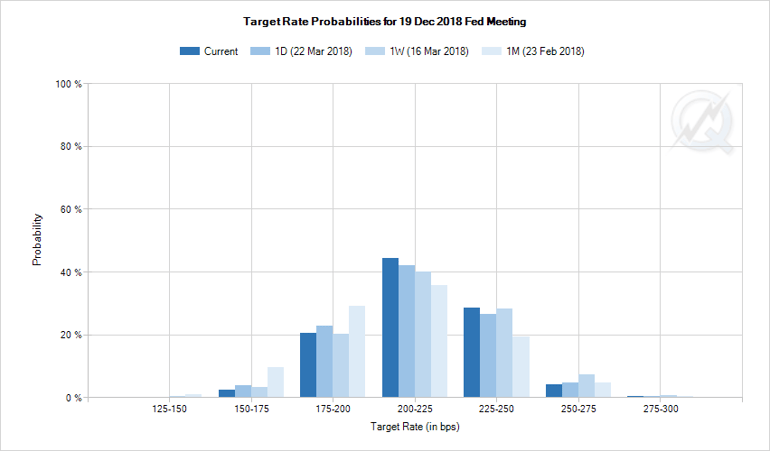 The likelihood of two more hikes (200-225) had risen, but so have the odds of three more hikes (225-250), although by not as much.  Much will depend on domestic growth and the outcome of President Donald Trump’s perceived aggressiveness on trade – more on that below.

CAD was the winner on the week, following some strong economic numbers and an apparent breakthrough in the NAFTA talks.  Not surprisingly, it involved auto manufacturing.  American negotiators had been demanding a huge increase in both US content and North American content to 85% from 50% and 62.5% respectively, a demand flatly rejected by Canada and Mexico.  Sudden American softening on this issue took the markets by surprise.  With this obstruction apparently having been dropped, the route to a revised NAFTA agreement has suddenly become very clear, so Mr. Market bought both NAFTA currencies (CAD and MXN) as a result.

It bears recalling that the loonie took a major hit after recent dovish remarks by Bank of Canada governor Stephen Poloz.  He seemed reluctant to raise rates while the Fed is clearly on a rate-hike path.  Regardless, unexpectedly strong February CPI reports last Friday – rising +2.2% vs call of +2.0% and well above the previous +1.7 – on top of positive NAFTA developments propelled the loonie to first place in the week’s trading

In the United Kingdom, the Bank of England kept overnight rates unchanged at 0.50% as was widely expected. 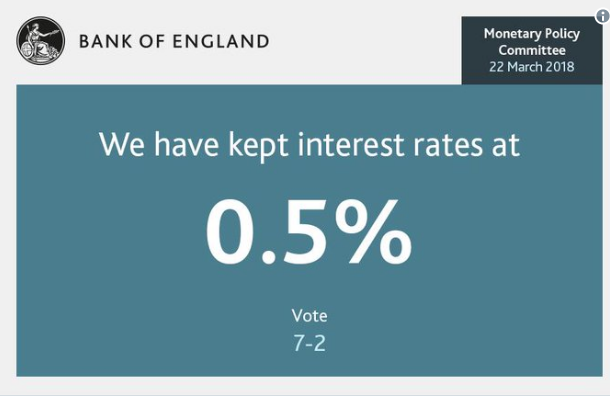 However, the vote was not unanimous as investors believed would be the case, with the tally being 7-2 (see above) and the two dissenters arguing for a quarter-point hike, citing declining economic slack and rising wages.  Sterling bounced higher on the report, weakened off but, in light of greenback weakness, still managed runner-up position on the week.

Coming back to President Trump and his aggressive trade posturing – it may be too early yet, but given American acquiescence on its NAFTA auto parts demands, it appears the administration may be satisfied with a NAFTA deal that does little more than address a few trade irritants.  We have long believed the administration’s real target is China.

Trade gaps or surpluses can be notoriously difficult to determine given exchange rates, goods valuation, services valuation etc., but it should be clear that a trade gap of around $20 billion USD annually between America and Canada is dwarfed by China’s trade surplus with the US of around $375 billion USD in 2017.  Furthermore, the Chinese yuan is a fixed – or ‘pegged’ - currency while the loonie trades in open markets.  Mr. Trump appears determined to correct this situation.  His announcement last week of $60 billion USD in tariffs on Chinese-made imported high-tech goods is just an opening salvo in a misnamed trade war, a ‘shot across the bow’ to the Chinese leadership.  Such actions unsettled equity markets, all of which posted rather large losses while the greenback faded on fears of a global trade war and (perceived) growing isolationism.

At the same time, the American administration is in talks to establish a free trade agreement with India, according to remarks made last January by American ambassador to India Kenneth Juster.  Aside from the historic commonality of a British connection and similarity of contract law and the like, a US-India FTA would restrict China from the prized American market while giving American and other companies a clear incentive to vacate China and relocate in India.  That China is a major holder of US treasury debt is a concern, but we think it doubtful that Beijing would divest its holdings and cause a rout in global bond markets.

Mr. Trump is playing a long game here, several moves ahead of his competitors.  The Chinese may soon find themselves checked, then mated.

The coming week will be shortened in Canada with market closings on Good Friday, while American markets will likely be open but with recommended early closures.  Data-wise, Canada sees January GDP and the Quebec and Ontario budgets, while stateside sees only secondary releases along with several Fed speakers.