Pity the poor greenback, beset on all sides by tempests of every description, including the real thing.  King Dollar has been ostracised to a degree not seen since prior to the election of Donald Trump last November.

To any casual observer, the reasons for the USD being in such disfavour are obvious: legislative paralysis in Washington; a sluggish economy; an indecisive Federal Reserve; plummeting bond yields and on and on ad nauseum.  Despite an apparent deal struck between Mr. Trump and congressional Democrats to resolve the looming debt-limit crisis, the USD simply couldn’t catch a break.

JPY was the winner on the week, rallying sharply on a general market theme of risk-off.  Although Japanese Q2 GDP was restated at +2.5% from the original +4.0% (which should be bearish for yen), overseas investors who had used JPY as a funding currency bought the currency to pay off their yen-denominated loans.  The worsening situation in North Korea, plus the discovery of radioactive fallout in the south apparently confirming the recent hydrogen bomb explosion in the north, has spooked investors mightily.  (Such players borrow yen at rock-bottom rates and convert to their desired currency, weakening the yen. The opposite is now occurring, thus strengthening the yen).

CAD was another of the stronger currencies on the week, with the Bank of Canada surprising, to some degree, market players with a quarter-point hike at their meeting last Wednesday. Although odds of a hike were quoted at 57% prior, many participants felt the Bank would wait to pull the pin in October.  The rate hike now, plus a rather hawkish accompanying statement, propelled the loonie to, at one point, a full three-cent gain against the USD.  The Bank pointed to recent strong GDP growth and buoyant consumer spending as justifying the hike.  Mr. Market liked that and bought the loonie with a vengeance. Subsequent to this was last Friday’s jobless numbers, of which the Bank doubtless had prior knowledge. Total jobs created were +22K, in line with the call of +15K, and the jobless rate declining to 6.2% against the call of 6.3%,  but the Full-time/Part-time split was quite disappointing: F/T -88K jobs and P/T +110K.  This will likely be explained away as students quitting summer work and returning to school and part-time employment. Who knows?  That may even be correct.

What is of concern is the apparent precarious financial state of many working Canadians.  Recent surveys taken in the past several months all depict a deeply indebted consumer struggling to stay ahead of the mortgage and the bills.  The most recent shows nearly 50% of workers being hard-pressed to meet their financial obligations should their paycheques be delayed by just one week. The same poll found that the reason for increased debt is higher spending, which is really just stating the obvious.  On that basis, it might be hard to argue for further rate hikes by the Bank of Canada, given that almost half of Canadian workers are, so to speak, tapped out.  Thus, the recent upsurge in consumer spending and its attendant upward push on Q2 GDP may already be fading.  Coupled with the soft employment numbers released last Friday and minimal wage hikes (What’s Going On? July 17th) , CAD may have difficulty pushing higher.

The EUR was one of the weaker currencies on the week which, in the current environment of pervasive USD softness, isn’t as bad as it sounds.  While ECB chief Mario Draghi was somewhat dovish in his statements last Thursday, leaving both rates and quantitative easing levels unchanged, most players are convinced that there will be some measure of tightening from the ECB sooner rather than later.  At some point this will be reflected in a stronger EUR.  We suspect zone paymaster and export powerhouse Germany is not pleased with these developments.

GBP rallied as well in advance of UK inflation numbers being released tomorrow and Bank of England rate decision on Thursday.  Traders have been disappointed with the BOE in recent months – perhaps this optimism is misplaced? 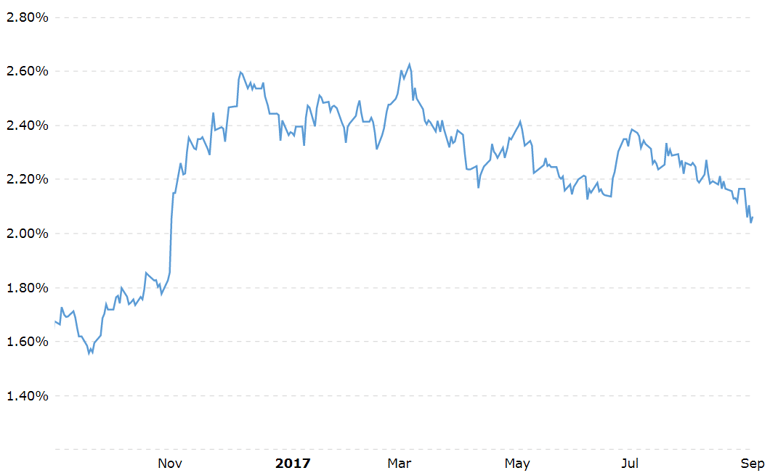 US 10 Year Treasury - What goes up must come down

Finally, we recently had a chat with a bond salesman who brought us up to date on doings in the fixed income market.  The salesman told us that bond traders, a nervous lot at best, had actually become quite bold in light of sluggish US growth and, as mentioned earlier, Federal Reserve indecision.  Few of them, the salesman continued, expect a rate hike at the Fed’s two-day meeting next week, nor do many think the Fed will make a clear announcement of their intentions regarding quantitative easing and tightening (QE / QT).  So this view, along with disarray in congress and apparent resolution of the debt-limit issue, has encouraged buying of bonds.  As can be seen in the chart above, the ten-year US treasury is trading just above 2.05% and is threatening to fall to levels not seen since last November. A sustained rally in bonds (falling yields) is not good news for either the greenback or the US economy, and complicates efforts by the Fed to normalise American interest rates.

The coming week sees the aforementioned BOE rate decision, also the Swiss National Bank along with a slew of American statistics.