Neutral is the New Hawkish

The USD managed to rally against every major currency last week excluding the CAD (more on that later).  A rally in the currency was expected after being mulled over since the beginning of June and ahead of the FOMC meeting at the end of the month.  The catalyst for the move was the announcement that the head of the IMF, Christine Lagarde, had been nominated as the new President of the ECB.  The USD rallied, as Lagarde is perceived as an uber-dove in the monetary policy world – she isn’t an economist but rather a lawyer and a politician and as we all know, politicians favour “easy money” policies.

The jobs report may cause some to question the need for an immediate interest rate cut but this view fails to understand the mindset of the current Fed members.  The last FOMC meeting showed that half of the members feel that easing is necessary due to concerns centered on trade and inflation and not necessarily the structure of the economy.  FOMC members are right to be concerned about trade since global manufacturing surveys continue their downward trajectory.  JPMorgan's Global Manufacturing PMI for June fell to its lowest level in 6.5 years and posted back-to-back sub-50.0 readings for the first time since the second half of 2012.

A total of 18 out of 30 countries signalled contraction.

Why so negative, didn’t the US just register its longest expansion in history, breaking the record of 120 months of economic growth from March 1991 to March 2001?  Yes, that’s true, but this is a rear-view mirror economic indicator while the PMI Surveys are forward looking since they are based on actual business manager’s views – this isn’t rocket science. 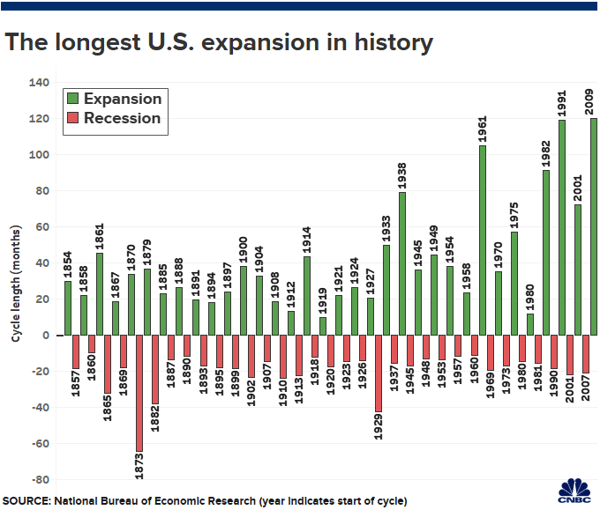 Along the same lines, the Governor of the Bank of Finland and a member of the ECB, Ollie Rehn, made a startling revelation in an interview with the German newspaper Boersen Zeitung on Thursday.  He said that the Eurozone’s economic slowdown is not “temporary”.  Rehn suggested that an economic rebound did not appear imminent and that the ECB should move to provide further monetary stimulus.  This is very surprising since Rehn is considered a hawk and as little as two months ago he was talking about raising interest rates as soon as the soft patch ebbed.

Looking ahead, the Bank of Canada holds a policy meeting this Wednesday.  The CAD was the best performing currency last week with a slight gain against the USD but much bigger gains against the other majors.  Last Wednesday, we learned that Canada’s trade balance unexpectedly swung into surplus for the first time in 10 months on a broad-based jump in exports.  The country ran a rare trade surplus on $762 million in May, it’s only the fourth surplus for the country since oil prices began declining in 2014.  Exports grew by 4.6% but more importantly, non-oil exports rose 6.3%.  On Friday, Canada reported very solid jobs data.  The headline number showed that the economy shed a net 2,200 jobs in June after two months of gains, however full-time jobs were up by 24,100 offsetting a decline in part-time employment.  Also, good news for workers was that hourly earnings for permanent workers jumped to 3.6% from 2.6%.  This recent data continues the trend from the start of the year and reinforces the notion that the domestic economy has emerged from its transitory soft patch from December to February.  This helps to explain why the CAD is the strongest major currency year to date with at 4.3% gain against its US counterpart.

Most people forget that the BOC’s last policy move was a hike; in fact they have hiked rates five times since July 2017.  Yes, the last hike was in October of 2018 and they have left rates unchanged in 5 meetings since then.  However, in this current global monetary environment – orange is the new black which is to say that neutral is the new hawkish.  Thus, the BOC will be on hold while the Fed cuts rates which should drive the CAD to the 1.28 level in the months ahead.  But before that happens, the momentum indicators on the chart are trying to turn and if successful should help push the currency pair to the 1.32 level before resuming its downward path. 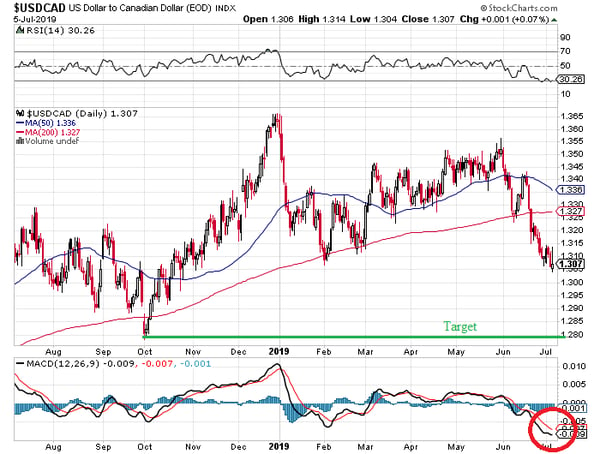 In addition to the BOC announcement, next week we get a slew of Fed speakers, the minutes of the last FOMC meeting, US CPI, as well as economic data points from the UK, Eurozone, and China.