Markets are becoming increasingly difficult to understand, let alone forecast with any degree of confidence.  The week past was no exception.

The big winner, as should be obvious above, was GBP.  As mentioned in our previous newsletter, both UK inflation figures and Bank of England rate announcement were slated for release last week, and neither disappointed. British CPI came in stronger than expected at +2.7% yr/yr versus call of +2.5% and well above the previous +2.4%.  BOE Governor Mark Carney, while not raising rates this go-around, indicated strongly that rate hikes are imminent.  Our learned colleagues Dr. Long & Mr. Short parsed Mr. Carney’s comments and summarised as follows;

Mr. Market has been waiting patiently for such a tone from the governor, and while there is indeed some wriggle-room in the above remarks, players took it as confirmation of coming rate hikes. 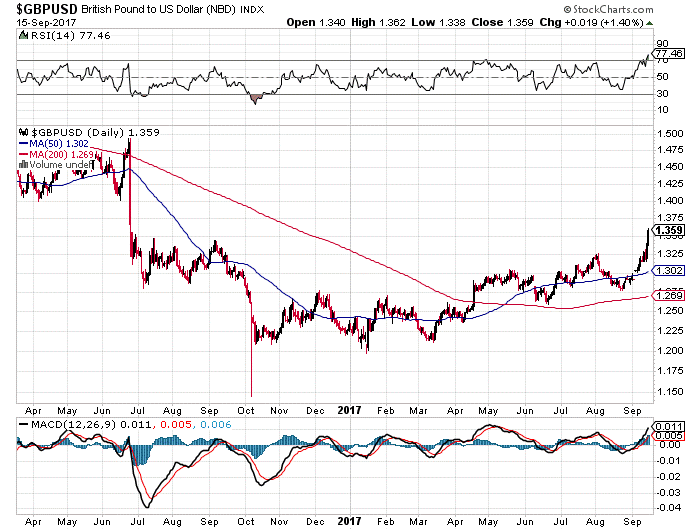 JPY was the loser on the week, losing ground as the international situation (Read: North Korea) appeared to calm down somewhat, at least for now.  Investors were encouraged to, once again, borrow at absurdly low rates in yen, sell JPY into the desired currency and invest wherever. – the opposite of last week which saw the yen rally sharply.

Speaking of the international situation, last Thursday saw North Korea lob a missile over mainland Japan – at one time that would have been considered an outright act of war – and Friday saw the terror strike on the London tube.  Market reaction seemed to be a collective shrug of the shoulders.  Players may have grown tired of the games being played by the inscrutable Kim Jong-un, and until The Dear Leader does something really serious, investors now appear inclined to ignore his antics.  Even the subway terror strike, sadly, is part of the general event environment nowadays and, while noted, was just as quickly forgotten.

USD managed to recover somewhat in the risk-on atmosphere of last week’s trading, but any sort of strong recovery may be delayed for some time. On inflation, August CPI showed some signs of life, coming in at +1.9% yr/yr vs the call of +1.8% and approaching the Fed’s semi-official target of 2.0%, while August PPI came in at +2.0% vs call of +2.1%.  These numbers should be reasonably supportive of the greenback, one might think, but the overall economy continues to advance painfully slowly.  Retail Sales for August were rather disappointing, printing at -0.2% mth/mth vs call of +0.1%, ex-autos -0.2% mth/mth vs call of +0.5%. 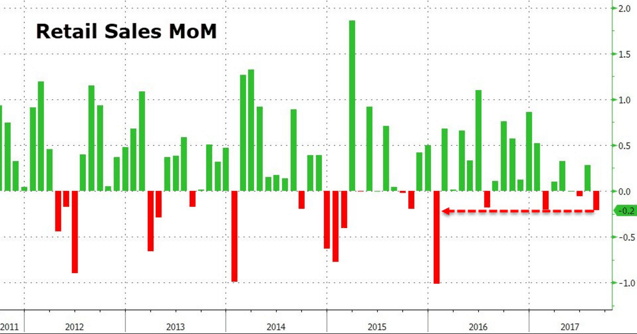 Consumers are keeping their wallets closed

American consumers don’t appear to be a terribly happy lot, either,  The widely-watched University of Michigan confidence measure exhibited a divergence between current conditions and future expectations.  Although the headline number inched up slightly to 95.3 for September vs the call of 95.0, still the future index wasn’t so hot, declining from the previous month’s 87.7 to 83.4 vs the call of 83.0 – a worrisome trend.

Wednesday sees the Federal Reserve rate announcement, widely expected to be unchanged at 1.00% - 1.25%. Fed chair Janet Yellen will be taking questions from reporters, and perhaps market players will be able to glean some hint of current Fedthink on the US economy. 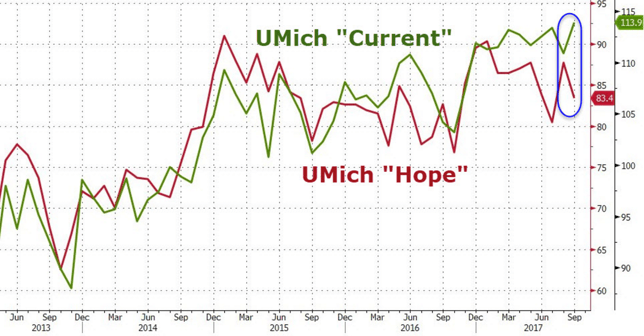 Events were quiet in the Eurozone and in the True North, as well.

Players will continue to monitor their news screens for any surprise developments on the Korean peninsula. That said, the coming week sees, aside from the upcoming Fed rate announcement, mostly secondary numbers in America and inflation numbers in Canada on Friday