Last week saw a mere handful of economic statistics in America, nothing of note in Canada but there was a sizeable sell-off in US and global equities.  Interest rates see-sawed while the USD lost ground to most currencies.  A confusing mix – let’s see if we can sort it out.

With the strong economic recovery in place in America, investors are becoming increasingly concerned about inflation and are watching the monthly numbers closely.  Last week’s release of both US PPI and CPI came in below expectations, disappointing USD bulls who had been anticipating higher inflation to act as a prod to the Federal Reserve and its rate-hike agenda.  In the event, the numbers were a touch softer than expected: September PPI came in at +2.6% yr/yr vs the call of +2.8%, while the core rate (ex-food & energy) came in at +2.5% yr/yr vs call of +2.6%.  At the consumer level, September CPI emerged at +2.3% yr/yr vs the consensus +2.4%, while the core was +2.2% vs call of +2.3%.  Not huge misses, but misses nonetheless on all four key indices.  Mr. Market was unimpressed and sold off the greenback in response.

At the same time, the US treasury department was auctioning off a large supply of new 3-yr, 10-yr and 30-yr treasury bonds into a badly frightened bond market.  Strong economic growth, big government deficits, low jobless claims and swelling confidence have spooked bond traders, always a jumpy lot.  With a lack of buyers and plenty of new supply, bond yields spiked higher early on in the week.

As can be seen above, the 10-year yield touched 3.25% early last week.  Our friend the bond salesman explained to us that this level makes bonds very competitive with equities.  Many portfolio managers would consider selling equities and booking some serious profits following the recent equity run-up to switch into a guaranteed and ultra-liquid 10-year US treasury – and that is precisely what happened.  While the Dow Jones Industrial Average (DJIA) isn’t the best equity market bellwether (the S&P 500 is broader), still it is historic and very widely known.  When it commenced a sharp sell-off early last week, other equity markets were quick to follow.  By Friday close the market had recovered only slightly.  (Although this is by no means a market crash, far from it actually, still it continues the long tradition of the so-called ‘October surprise’.  Think 1929, 1987, 2008 and now 2018)

So much, then, for bonds and equities.  What else was going on?  With the recent signing of the three-way USMCA deal, President Trump is now free to focus on China and its (alleged) trade improprieties. The Chinese yuan (CNY) has been weakening since June and appears to have stabilised at a much lower level. With the imposition of US tariffs on numerous Chinese-made goods, a weaker CNY would help offset these additional charges. 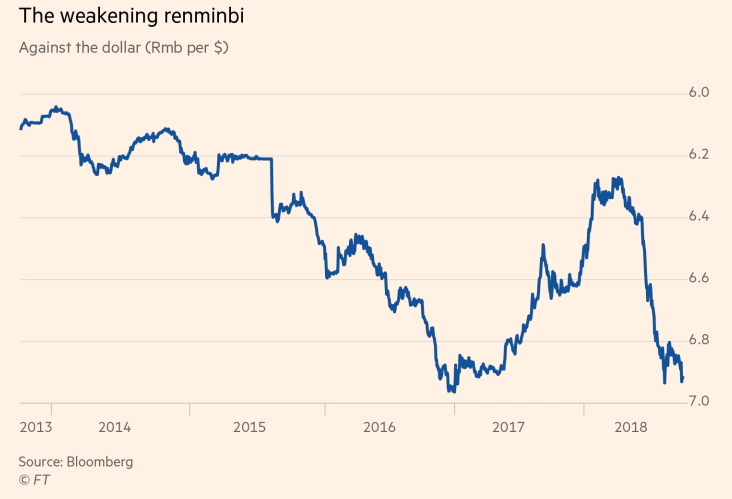 CNY vs USD – Taking a tumble?

As the above chart demonstrates, the CNY has been steadily weakening against the USD, making Chinese exports that much more competitive but likely drawing the ire of US authorities.  The Chinese have been attempting to jumpstart their sluggish economy and a lower exchange rate is one way of accomplishing that objective – but it can also look like exchange rate ‘manipulation’.  Bottom line: If this US-China ‘trade war’ intensifies, a ‘currency war’ might follow in its wake.

In the True North, the CAD was the week’s loser, lagging all the other currencies picking up ground against the greenback.  A lack of economic news didn’t help, while a widely-circulated article in the Financial Post caught many investors’ attention with its downbeat appraisal of Canada’s current Liberal government and dimming economic prospects.   It pointed out that, while the Canadian economy has recently performed reasonably well, the domestic equity markets have badly lagged equity markets elsewhere.  In fact, in the third quarter, the S&P 500 proxy outperformed the S&P TSX 60 proxy by an annualised rate of almost 29%.  The writer pointed out that equity markets discount the future and, in his view at least, Canada’s prospects have dimmed under the government of Prime Minister Justin Trudeau.   Our learned colleagues Dr. Long and Mr. Short provided some notable quotes:

The rest of the piece was along much the same, or worse, lines.  We would add that the recently-concluded  NAFTA (now USMCA) trade negociations did not exactly inspire enormous confidence in Team Trudeau (such as by putting gender issues and the like in continental trade talks), and generally displaying a cavalier attitude towards what is, in reality, Canada’s most important trading relationship.  Given this negative assessment of Canada’s outlook and the absence of hard news, the sub-par performance last week of the loonie should come as no surprise.

The coming week sees key Canadian releases on Friday, while America will see key numbers starting on Monday, with the most recent FOMC minutes slated for release this coming Wednesday.