The talking points from the past week were the Fed, the Bank of Canada announcement, the flattening yield curve, the employment data from the US and Canada, the US/China trade truce, more Brexit news, the OPEC meeting, and the arrest of a prominent Chinese business person.  While the stock markets globally took a hit, it was the AUD that was the worst performer in the currency world.  The convergence of negative headlines, centered around China, drove the AUD down by 1.5% due to its close trading relationship with China.

The week had started on an optimistic note on news that President Trump and President Xi had reached a 90-day trade truce on the sidelines of the G20 meeting.  However, due to the lack of a joint statement after the meeting, each party decided to highlight different aspects of the results.  This led to contrasting narratives in the media – he said, Xe said (pardon the pun) -which in turn caused confusion in the markets. China’s statements on the meeting did not mention the 90-day tariff freeze at all while US officials were touting that China agreed to immediately restart purchases of US agriculture and to slash tariffs on American cars. There was even confusion on the US side concerning the start date of the 90-day period.  By Thursday, equity markets went south on news that Huawei chief financial officer Meng Wanzhou was detained in Vancouver, Canada at the request of the US, which wants her extradited to the US to face charges of conducting business in Iran in contravention of US sanctions. The up and the big down can be seen in the daily trading of the AUD.

The arrest of the Huawei CFO would suggest that the US is not really interested in a trade deal that narrows the trade surplus, but rather is keen on keeping China’s economic ambition contained.  Why do I think this?  Here are four reasons:

Remember the US levied sanctions on Iran after it decided to withdraw from the Iran nuclear deal.  All of the other countries that are party to the deal are still in and abiding by the agreement which begs the question what authority the US has to impose the sanctions in the first place and enforce them on companies that do not operate in the US as well. This is where China and other countries, including European nations, have a problem with the US’s projection of power. This has put Canada in the middle of this diplomatic row with Beijing threatening severe retaliation against Canada if the Huawei CFO is not released.

If it’s not the China/US trade war driving global equities lower then it’s the preoccupation of the Fed’s rate hiking trajectory. Leaving aside whether US curve flattening or inversion is signaling a US economic slowdown, it does suggest that Mr. Market thinks the Fed may be closer to a pause in rate hikes then was previously forecasting by way of the Fed’s dot plot. Despite the slight pickup in the manufacturing and service sector activity the momentum in the US economy is slowing. The latest Fed Beige Book confirms this. A notable trend was the rising frequency of the word "tariff" with every subsequent report – in the March Beige Book there was no mention of the word “tariff” but every subsequent report displayed a rising trend with the latest report showing  instances of word "tariff" a total of 51 times. Meanwhile, the word “slow” and its variants also increased over the last five reports. 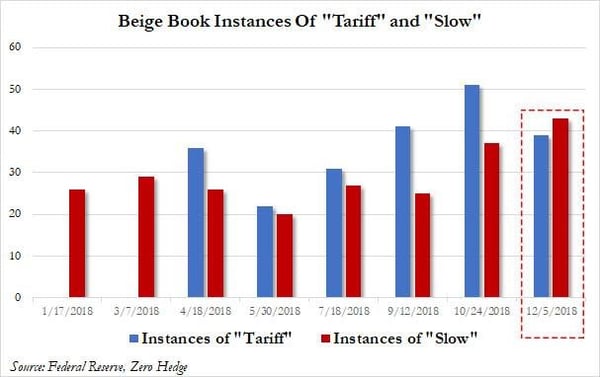 The fact that the Beige Book is hinting that growth is moderating should not be surprising, given that the economy is growing above trend and is in a classic late cycle expansion. Proof of this would be Friday’s employment report. Markets and pundits were disappointed with the headline number that the economy only added 155K new jobs in November, which was less than the 198K consensus forecast. However, the unemployment rate fell to a half-century low of 3.7% - think about it, with an economic expansion this long in the tooth and an ultra-low unemployment rate, it would be very difficult for the economy to continue adding new jobs at 200K monthly clip. The average hourly wages component of the report grew at 3.1%, which represents the highest rate of wage growth since 2009, the year this business cycle started. For these reasons, we don’t see any reason why the Fed would not raise rates at its December 19 meeting.

The CAD has a wild ride last week with a big down day after Wednesday’s Bank of Canada announcement and a big up day after Friday’s domestic jobs data. The BOC struck a decidedly dovish tone in its monetary policy statement. As expected, the bank left interest rates unchanged at 1.75%, but noted that “there may be additional room for non-inflationary growth” and that “data showed economy has less momentum going into Q4.” (Translation:  no need to raise interest rates for a while). In addition, the BOC acknowledged a “materially weaker” outlook for the oil sector, a faster-than-expected deceleration of inflation, moderating global growth, a drop in business investment and downward historical revisions to output. In other words, the BOC’s economic assessment was significantly less confident than previously.

On Friday, Canada hit it out of the park with strongest single month of job growth since Statistics Canada started keeping records in 1976. Canada added 94,100 jobs in November, almost all of them full time, sending the unemployment rate to a record low 5.6%. Adding to the good news was a report that OPEC had reached an agreement to cut production by 1.2 million barrels a day, which should lend support to the price of crude, Canada’s biggest export and by extension the CAD.