The USD continued its countertrend bounce within its medium-term bearish downtrend, with only the GBP and NZD managing to avoid losses on the week. In an interview with Reuters last Monday, I stated "I think we are seeing the roots of a broad-based counter-trend rally in the USD starting to take shape." I went on to explain why I thought this, but my reasons never made it into the article. Let’s examine that now.

There are a few reasons why I believe we are going to see some strength in the USD over the next couple of months before it eventually resumes its bearish downtrend. The first is market sentiment. The bearish one-way short trade on the USD had become a very crowded one going into December. From the late March spike high to the end of 2020, the US dollar index had declined by 14.23%. Crowded trades tend to reverse at some point and the year end profit taking was the opportunity for that to happen.

My second reason for calling a turn in the USD was risk aversion in equity markets. The USD spiked last year when equity markets tanked from mid-February to the end of March with the onset of lockdowns due to COVID-19. Two weeks into 2021, the stock markets have started to sell off on the emergence of variant strains of the virus from around the world, renewed lockdown measures slow the spread of the pandemic, and the very slow vaccine rollout. Add in the turbulence over the GameStop short squeeze from last week and we have a stock market that is on edge, hence the bid on the USD.

The developing economic divergence between the US and Europe was the third reason that signaled a turn in the USD was likely. The euro is, by far, the largest component of the US dollar index, making up 57.6% of the basket. Thus, it stands to reason that if one economy performs better than the other, it will be reflected in the exchange rate.

The January flash PMI readings suggested that a divergence in growth between the US and Europe was developing. Last week’s Q4 GDP release for two of Europe’s biggest economies confirmed suspicions. German growth in Q4 slowed to just 0.1% down from 8.2%, while France’s GDP for Q4 came in at -1.3%, its fourth decline in five quarters. The economic activity wasn’t as bad as feared towards the end of last year, but the threat of a double-dip recession still remains a possibility for the Eurozone. In contrast, the first estimate for US Q4 growth was 4%. This week’s final PMI reading for January should help to confirm this divergence. 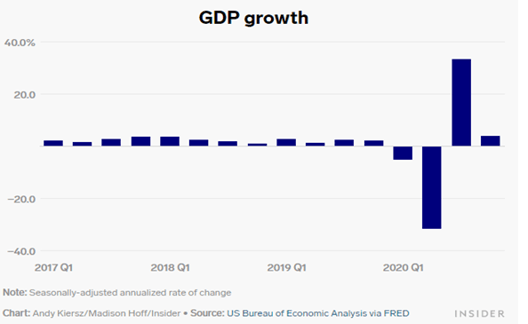 I want to stress that this isn’t a change in the underlying trend in the USD, it is merely a countertrend rally in the USD’s bearish trend. Ironically, the forces that helped produce the higher growth in the US and thereby provide support to the USD in this current phase will ultimately sow its demise. The easy fiscal policy is going to power the economic growth; however, it will only add to the growing twin deficits, which are the cornerstone of the bearish case for the USD. 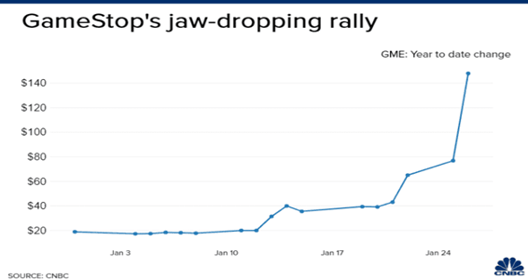 Last week, everyone was transfixed by the battle between WallStreetBets, a social media-organized group of small-money retail investors on Reddit, and hedge fund Melvin Capital over the stock of GameStop. Melvin Capital was overly short on the stock, so WSB decided to start buying it, mostly through their favourite mobile app Robinhood. This epic battle was painted by the media of young versus old, poor vs. rich, Main Street vs. Wall Street, and on and on and on. The buying by WSB caused the price of GameStop to accelerate as shorts had to buy to get out of their short bets on the company. Melvin Capital lost a stunning $7 billion in January and needed a bailout from two of its biggest shareholder Citadel and Point72. Ironically, Melvin Capital, a hedge fund, did not hedge their GameStop short bet. This video from The Hill captures the kind of uproar this battle has caused.

WSB has turned its attention to the silver market, a place where participants have often complained about price manipulation. The price of silver on the futures markets increased by 7% and 5% on Thursday and Friday. WSB is causing a short squeeze in silver which will force the shorts to buy silver to unwind their short bets. As much as I love the fact that the little guy is taking it to Wall Street, if these short squeezes continue, they are going to not only likely to lose their investment, but they may also well bring down the entire financial system. How? In theory, large, short squeezes will cause shorts to cover their positions, which means they will have to sell their long positions in other stocks, leading other holders of common positions to cut exposures in turn. If this were to happen, you can expect the USD to spike up, like it did last March. 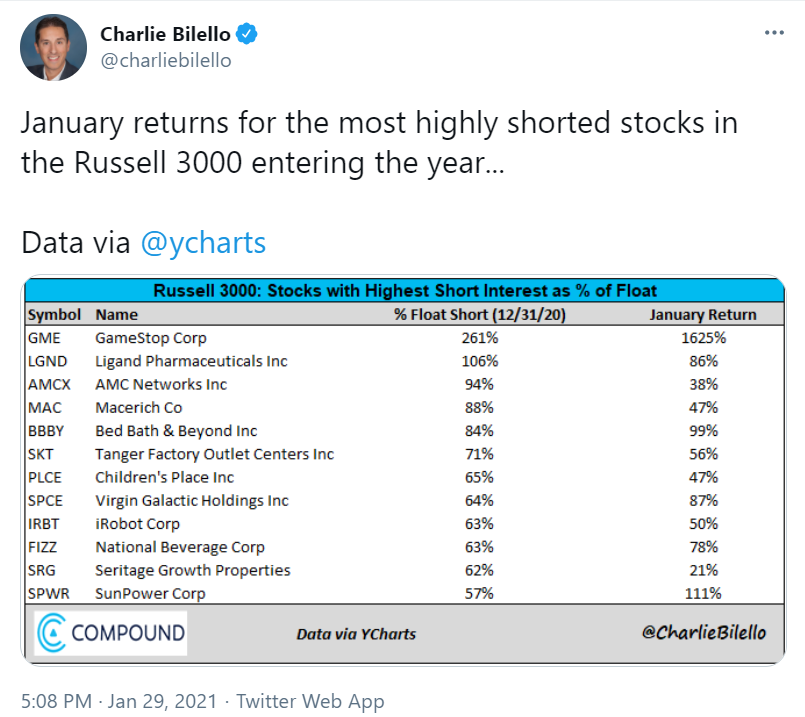 The reality is that at the end of the day the strategy unleashed by WSB is merely an extension of the bubble dynamics that were made possible by the Federal Reserve pumping trillions and trillions of liquidity into a financial system where there are now bubbles visible anywhere one looks. Easy monetary policy with interest rates near zero makes people think there is no risk, which is the farthest thing from the truth. At last week’s press conference after the Federal Reserve monetary meeting announcement, Chairman Powell was asked whether the Fed sees financial stability risks stemming from such market activity around the GameStop fiasco. He said, with a straight face, that monetary policy “does play a role” in asset pricing but suggested that investor optimism over getting to a post pandemic economy were due to vaccines and fiscal policy. It’s no wonder Bitcoiners have coined this phrase “fix the money, fix the world”.