The USD correction, which started shortly after the Federal Reserve hiked rates on December 14, continues to play out with different majors taking their turns at the top.  This week’s leader, the Australian dollar, is up 2.75% against the USD for the week and just over 4% month to date.  Most of the gains in the AUD can be attributed to the strong rally in commodities since the U.S. Presidential election and the slight firming of Chinese economic data.  Australia’s employment data will be released this week and after last month’s strong job growth a smaller increase is expected.  The rest of the dispatch will cover the other three developments that caught our eye last week.

UK Prime Minister Theresa May caused a stir in her January 8th interview with Sky News after she was asked whether she would "prioritise" controlling immigration over staying in the single market.  Her response was that the UK cannot expect to hold on to "bits" of its membership after leaving the EU.  This caused the GBP to slide to a ten-week low against the euro as her comments would seem to stress the so-called “hard” Brexit line.  May’s comments evoked a warning by Scotland’s Prime Minister Nicola Sturgeon.  She reminded May that Scotland voted to stay in the EU and that she is not "bluffing" on the promise of a second independence referendum if Scotland is "driven off a hard Brexit cliff".  Interestingly, May tried to backtrack on her comments the following day by blaming the media.  She said "I don't accept the terms hard and soft Brexit," implying that the media was responsible for framing the situation in those terms, not her.  She went on to stress  "What we're doing is (that we are) going to get an ambitious, good, best possible deal for the United Kingdom in terms of ... trading with and operating within the single European market." 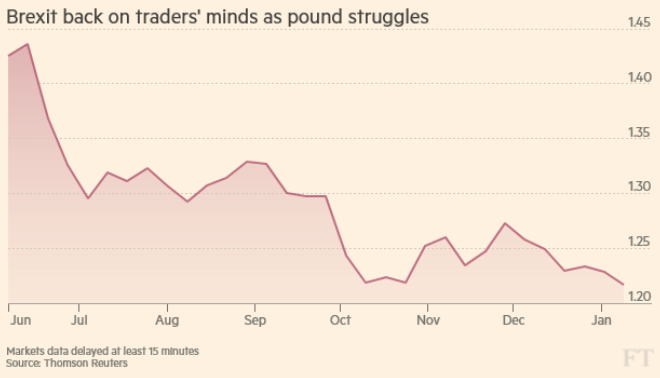 Strangely, the Governor of the Bank of England, Mark Carney, no longer thinks that Brexit poses the biggest domestic financial stability risk.  That honour now belongs to consumer credit.  Carney warned that the "extremely rapid" growth in UK credit card and loan debts had become "very difficult to ignore". 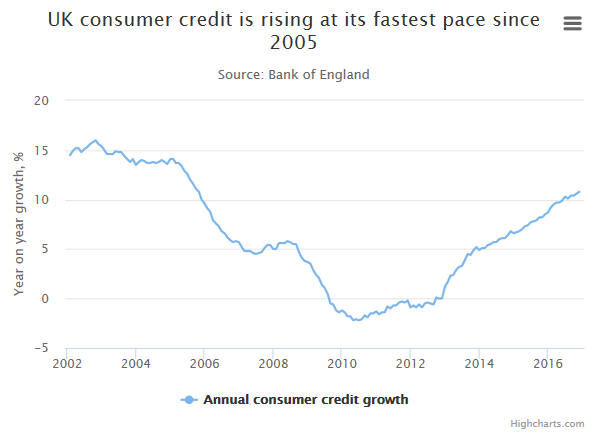 In the week ahead Mr. Market is gearing up for two important Brexit developments.  PM May’s speech on Tuesday is expect to lay out a roadmap to Brexit and the Supreme court ruling on the government’s appeal on the High Court’s Article 50 ruling, which obligated ministers to consult parliament before activating the two-year EU exit process.  Having said this, a new wrinkle emerged over the weekend that could throw a wrench into the mix – the leader of the anti-sectarianism Alliance Party, Naomi Long, said Ms. May could face a legal challenge from Northern Irish politicians if she tries to trigger Article 50 without a sitting parliament in Northern Ireland.  Elections in Northern Ireland look almost certain to be called on Monday after the government admitted Sinn Féin had not responded to calls to replace Martin McGuinness as leader – er, politics bites.

Elsewhere, the Bank of Canada will be front and centre in the week ahead with an interest rate decision and updated economic assessment.  Spoiler alert, the BOC has no intention of changing its policy rate of 0.50%.  However, based on last week’s release of its quarterly Business Outlook Survey the risk is that the BOC could sound very upbeat.  Remember, the CAD was quietly the best performing currency of 2016 as the government ramped up spending after the commodity bust and now looks ready to turn the corner.  The business survey showed hiring, investment intentions, and optimism about future sales at the best levels since Q1 2014. Combine that with the most recent Canadian employment report which showed 54K new jobs, including 81K full time jobs, and it's been a great start to the year.  Thus, as long as the new US administration doesn’t stir any trade wars with Canada, then the CAD may be able to put in another solid performance for 2017 but, as we have seen in the UK, politics has a way of botching things up.

Finally, the Fed released a new trial balloon. Two Fed members suggested that the Fed is now actively contemplating the reduction of the Fed's balance sheet – reverse QE if you will.  The first member, Philly Fed's Harker, said that when rates hit 1%, the Fed will "need to look at unwinding its balance sheet"; several hours later St. Louis Fed's Bullard added that a "balance sheet roll off may be better than aggressive hiking."  The current size of the Fed’s balance sheet is $4.5T and there is about $200B of US Treasuries that will mature this year and more than twice as much next year.  Throw in the current annual deficit of $500B, which could expand given the new administration’s plan to cut income taxes and increase infrastructure spending - the timing of this message seems curious to us.  We can’t even fathom how devastating the impact on global bond yields will be.  Add in the fact that foreign central banks continue to sell treasuries to shore up government budgets, and who exactly is going to step in finance the US government – a question for another day.