What a week, we had tariffs, counter tariffs, renewed hawkishness at the Bank of Canada, interest rate confirming data for the US Federal Reserve and increased volatility due to Italy’s politics. The fact that the NZD was the top performer on the week speaks more about the reversal of risk in the markets rather than country specific economic data.

You know trouble is coming when a rating agency downgrades your credit. The previous Friday (May 25th), after the markets closed and before the start of the weekend, Moody’s put Italy's credit rating, which currently sits two notches above non-investment grade status, otherwise known as junk, on review for possible downgrade. The reason, the potential for Italy fiscal strength to crumble under the new coalition government’s plans and the chance that current efforts at structural reform will falter. You don’t have to be a genius to figure out what was going to happen to Italian bonds when the markets opened for business on Monday – blood bath, yields were marked up as sellers took what they could get. The two-year yield doubled on Monday to 84 bps from last Friday, which itself had doubled from the previous day. By the way, at the end of April, the yield was at minus 31 bps. 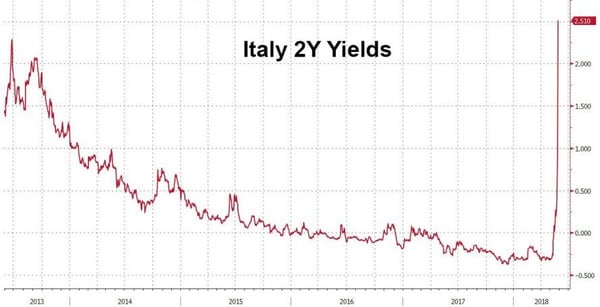 The move in Italy’s 10-year bond was even more pronounced. Just before the March election it stood at around 1.50%, a month later it was at 1.53%, just before Moody’s announcement it was at 2.20% and by Tuesday it hit reached 3.40%. Tuesday’s move was the biggest one day move since the 2011 European sovereign debt crisis.

The crisis was exacerbated after Italy’s President, Sergio Mattarella, rejected the coalition government’s choice of Paolo Savona for Finance Minister because of his eurosceptic views. So how radical is Savona? In his latest book "Like a Nightmare and a Dream", Savona called the euro a "German cage". After a couple of days of political wrangling, the coalition government offered up relatively unknown Giovanni Tria as the new Finance Minister, which was accepted. I guess President Mattarella didn’t read Tria’s December 2016 article titled "Vi spiego la competizione truccata in Europa che favorisce la Germania" or translated "I'll explain the rigged competition in Europe that favors Germany". Tria criticized the European monetary union and its fixed exchange rate for allowing countries, such as Germany, to run high external surpluses and says fiscal policy should compensate for that lack of flexibility.

Italy’s new government is made up of a coalition between the right wing Northern League party (which was previously a separatist party wanting Northern Italy to separate from Italy) and the anti-establishment populist party, the 5-Star Movement; and they now have a lesser version of an anti-euro finance minister – what could possibly go wrong? No wonder Italian credit markets reacted so violently. Don’t worry folks, the new coalition government plans on making Italy great again. Remember, Italy is definitely not Greece, it’s actually worse, since Italy has the third largest economy in the Eurozone. 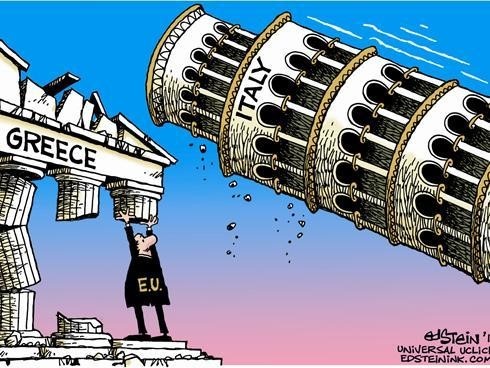 Be that as it may, Trump’s trade tariffs managed to move Italy’s political woes off the front page. On Wednesday, the Trump administration announced that the US would go ahead with their steel and aluminum tariffs at the June 1st deadline against Canada, Mexico and the European Union. Ironically, the tariffs against US allies are being justified on national security grounds. Canadian Prime Minister Justin Trudeau took particular offense to this stating "these tariffs are an affront to the long-standing security partnership between Canada and the United States, and in particular, to the thousands of Canadians who have fought and died alongside American comrades-in-arms". Canada responded quickly, as did Mexico and the EU. Canada’s retaliatory tariffs are valued at $16.6 billion — a dollar-for-dollar matching of the US tariffs’ impact — and will take effect July 1.

G7 finance ministers and central bankers were meeting on the weekend in Whistler, BC ahead of next week’s G7 leaders meeting in Quebec. Needless to say, I’m sure US Treasury Secretary Mnuchin felt like it was a G6 meeting “plus one”. The closing statement read “Concerns were expressed that the tariffs imposed by the United States on its friends and allies, on the grounds of national security, undermine open trade and confidence in the global economy,” the statement said. “Finance Ministers and Central Bank Governors requested that the United States Secretary of the Treasury communicate their unanimous concern and disappointment.”

Trump being Trump couldn’t let that slide; he likes to have the last word, to which he said:

Moving from politics to monetary policy, the Bank of Canada caught the markets flat footed on Wednesday. It left interest rates unchanged at 1.25% but it did manage to sound somewhat hawkish with the dropping of references to being cautious, the need for stimulus and the slack in the labour market. This has kicked the door open to a possible July rate hike. Market-implied odds of a July rate hike from the BOC have surged from 53% before the meeting to 79%. The CAD popped by 1.3% after the statement but those gains were given back the very next day after a soft Q1 GDP report and Trump’s tariff announcement.

On the US interest rate front, Fed Governor Lael Brainard backed gradual rate hikes in a speech to the Forecasters Club in New York. Why is this news – because Brainard, a long standing dovish member of the central bank’s policy committee, is now embracing a more hawkish policy stance. This pretty well cements a rate hike at the June 13th meeting. Furthermore, Friday’s US jobs data highlighted the tightness of the labour market and left little doubt that a hike later this month will be delivered.

Where does this leave the USD. The price action in the dollar index has left a bearish divergence (blue circle) in the slow STO, which did not confirm the May high. The MACD is also rolling over (red circle). Also, the fact that the USD did not push higher after a strong jobs report speaks volumes. Looking through the lens of trade policy, Trump’s insistence on reducing America’s trade deficits through protectionist trade policies by definition will lead to less demand for the USD. The dollar has had a great run up since mid-April and has been in an uptrend since mid-January, a pause for a correction would not be a surprise. 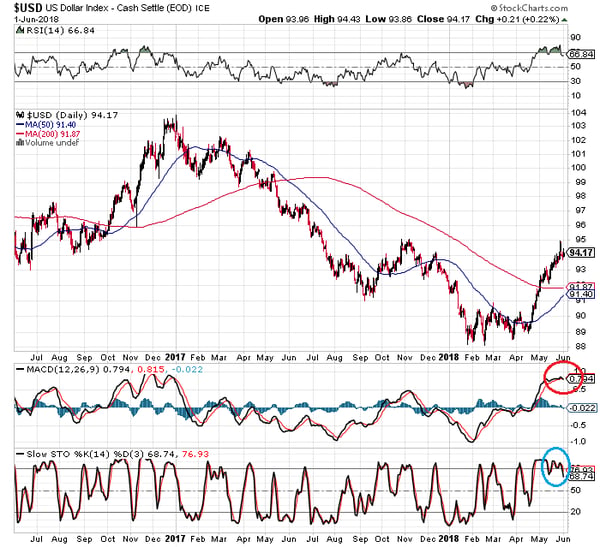