Happy New Year to all our valued clients! The weekly newsletter is back for 2017.

As can be seen from the chart above, USD was a moderate loser on the week as investors continued to take profits after the big run-up from November 8th.  A disappointing ADP jobs number last Thursday, coupled with the persistent inability of the Dow to top the magic 20,000 level – although it got close - and a general feeling that a correction was overdue caused players to take a breather.  There were also some major developments impacting both North American currencies and we will now discuss them.

The major news last week emerged Friday morning with the release of US and Canada employment stats, with the True North overshadowing Uncle Sam in job creation. The Canadian economy saw a net gain of 53.7K jobs, with the breakdown showing strength - part-time jobs fell by 27.6K while full-time jobs were up 81.3K (which is as if the US created 800k jobs). The jobless rate rose to 6.9% from the previous 6.8% as expected, but we have long felt that a rising rate in a time of job growth indicates an expansion of the labour force, as the jobless are encouraged to start looking for work.  The participation rate would seem to confirm this: 65.8%, above last month and the call of 65.6%. The Canadian trade balance actually moved into an unexpected surplus of +0.530 Bln vs last month’s deficit of -1.020 Bln and well above the call of -1.600 Bln.  The loonie had gained considerable ground since mid-December with rising commodity prices and weakness in the once-ebullient greenback; by late last week it appeared to have peaked and lost ground into the jobless numbers, but did a U-turn after these strong numbers last Friday.  However, CAD faded at the close as USD improved on a rallying Dow.

By contrast, American jobless numbers failed to excite, at first, anyway. December’s payroll total came in at +156K, slightly below the consensus of +170K, with the rate rising as expected to 4.7% from November’s 4.6%.  Net payroll revisions of +19K for the two months previous were largely ignored, but the hourly earnings were a big surprise, rising a strong +2.9% vs the call of +2.8% and well ahead of last month’s +2.5%, the strongest yr/yr gain since 2009.  All of this can be taken largely as the last jobless numbers of the Obama Era, as a new era under Donald Trump begins this month.  We anticipate continued improvement! 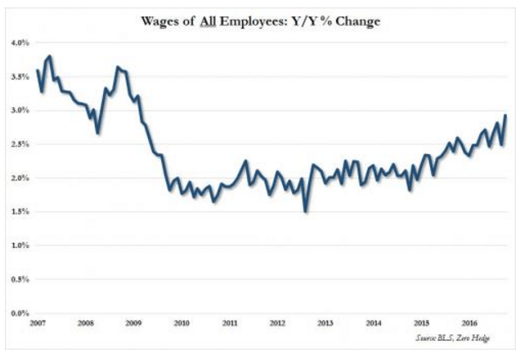 Bond traders, the perpetual pessimists, rallied both the 10-year and 30-year Treasury bonds on the general short-covering and profit-taking of the last while, but have run in fright after the strong hourly earnings number. After trading as high as 2.50%, the ten-year rallied as low as 2.39% before grinding to a halt on Friday, while the 30-year bounced back above 3.00% as Mr. Market reassessed his outlook on yields and administered rates.

Which brings us to the Federal Reserve, and its minutes released last Wednesday. It is important to keep in mind that these documents need to be carefully parsed, as they are nuanced pieces of fluff that seek to conceal as much as to illuminate.  These particular minutes refer to the last FOMC when the Fed raised the overnight rate and the post-election market rally was in full swing.  Not surprisingly, the members had a broad range of views, but were largely united in the opinion that uncertainty had increased with the election of Mr. Trump.  There was considerable concern that expansionary fiscal policy ‘might raise aggregate demand above sustainable levels’, potentially nudging the Fed to act more aggressively than anticipated.  Some members also thought a stronger USD might hurt exports – although the monthly trade gap isn’t the bugbear it once was – while others felt ‘that the risk of a sizable undershooting of the longer-run normal unemployment rate had increased somewhat’. The takeaway seems to be that the Fed will tolerate a decline in the jobless rate to the extent that inflation does not become a major problem.  An inflation rate of 2% is the Fed’s nominal target and, given members’ remarks about it, we will likely see market players looking at the monthly numbers much more closely. 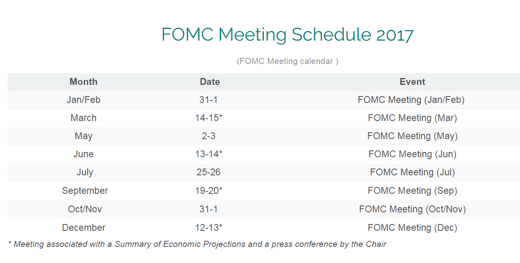 However, November CPI (consumer inflation) rose at just 1.7% yr/yr, so there may be a bit of room yet for gains in US employment before the Fed feels compelled to act. The USD may likely rally on these developments.

Elsewhere was rather subdued in the shortened week, as investors shook off the post-Christmas blahs and re-focused on the markets. It was quiet in the UK and the Eurozone - likely the calm before the storm - as Brexit will re-emerge as an issue not long from now and Europe faces a potential populist revolt of its own with elections slated in France and the Netherlands.  The position of German chancellor Angela Merkel looks increasingly wobbly as she faces national elections in 2018.  The Far East was quiet as well, with only a ham-fisted, and unsuccessful, attempt by the communist authorities in China to impose capital controls causing a disturbance.  Nothing of note occurred in Japan.

AUD and NZD gained along with CAD on the general run-up in commodity prices. Aussie also gained, albeit only marginally, on a surprise trade surplus of 1.240 Bln AUD, the first since March 2014. That aside, most of Aussie’s gain was in reaction to rising coal and iron ore prices - the flip side of the weaker USD.

The correction in the US dollar index that ensued shortly after the Fed's mid-December rate hike is still not yet complete. The technical momentum indicators are neutral and a sustained mover over 103.80 (green line on chart) would be needed to conclude that the correction was over. 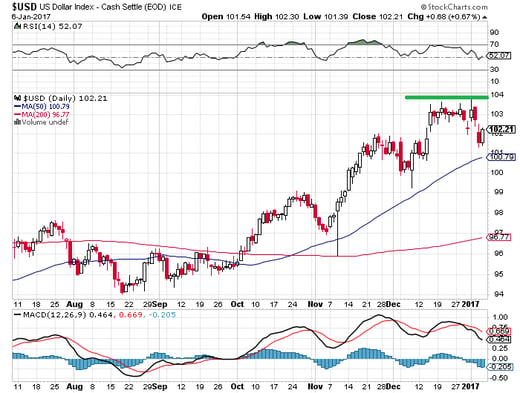