The early part of the week was dominated by headlines surrounding the high political drama in Washington and London. On Thursday, politics took a back seat to the FOMC announcement, which occurred on a Thursday instead of the customary Wednesday. The Fed was never going to make any policy changes anyway, especially without being able to explain it with a press conference – that will change in 2019 as the Fed has decided to hold a press conference after each and every FOMC meeting. On Friday, we were back to politics.

Before we get to the politics, I wanted to point out that the New Zealand and Australian dollars were the best performers last week with gains of 1.36% and 0.39%, respectively. Incidentally, both nation’s central banks held policy meetings last week. The Reserve Bank of New Zealand kept its policy rate unchanged at 1.75% and said that the combination of low unemployment and low inflation was preventing the implementation of a tighter monetary policy. Furthermore, RBNZ Governor Adrian Orr said it will keep the Official Cash Rate at this level through 2019 and into 2020. Meanwhile, the Reserve Bank of Australia kept its policy rate unchanged at 1.50% and raised its economic growth and inflation forecasts, but said that it did not see a strong case to raise interest rates in the near term.

In London, politics was front and centre. Early in the week there were reports of a secret Brexit deal – the EU would write an all UK clause into the withdrawal agreement which allow UK to remain in the customs union and thereby avoid an Irish border problem while maintaining the free trade of goods with Europe. This concession is being offered in order to help PM Theresa May win the support of Cabinet to conclude the Brexit deal.  May’s party, the Tories, depend on the Northern Irish unionists to remain in power and they will not accept any deal that treats Northern Ireland differently than the rest of the UK. Thus, this “secret deal” would appease them but would make a mockery out of Brexit. It seems that May’s tactic is to get a deal that can pass parliament instead of getting a deal that is good for the UK. 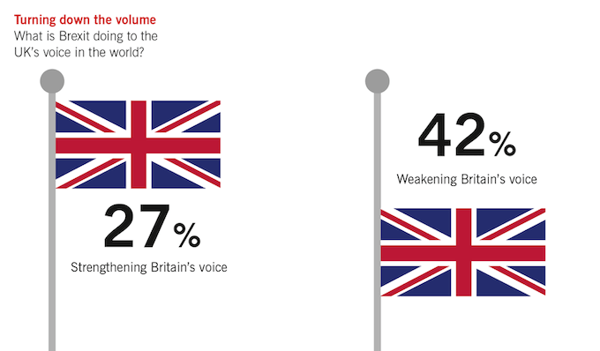 I guess this was too much for MP Jo Johnson, brother of Boris Johnson and junior transport minister, so he decided to quit and called for the country to pull back from the brink. The younger Mr. Johnson attacked the “fantasy set of promises” made during the referendum by Brexit campaigners such as his brother and said the vast gulf with reality meant it would be a “democratic travesty” if the public did not have another say. His resignation is important because it risks galvanizing other pro-EU ministers to vote against the deal, alongside Brexiteers who have already vowed to reject it. The time is ticking with less than five months before Britain is due to leave the EU on March 29th, 2019.

Staying with European politics for a moment, Italy has until Tuesday November 13th to respond to the European Commission’s demand for a revision to the 2019 budget proposals. By the way, the number 13 is considered a very lucky number in Italy. Once they receive the revised budget the EC will have three weeks to provide a final assessment, which could include the excessive deficit procedures (EDP). The EDP requires the country in question to provide a plan of corrective action and policies it will follow, as well as deadlines for their achievement. Euro-area countries that do not follow up on the recommendations may be fined. Italian Finance Minister Giovanni Tria is already on record by stating that meeting the commission’s demands would be “suicide” and calling its economic forecasts “a technical fault”. Stay tuned more fireworks to come.

The US mid-term elections are finally over - it was very much as expected as the Democrats took control of the House of Representatives for the first time since 2010, and Republicans held the Senate. This means that the Republican’s to do list of more tax cuts, Obamacare repeal, and other wish-list items will likely be thwarted by the Democrat-controlled House. However, this domestic policy deadlock will not alter President Trump’s trade war with China since he doesn’t need congressional approval to continue it. In fact, China trade tensions will continue and possibly intensify.

From politics to monetary policy, the Federal Reserve left interest rates unchanged in the 2.00-2.25% range at its Thursday meeting. Fun fact, it took 43 days from the previous FOMC meeting to change 24 words that would convey only two minor tweaks in the policy announcement. Firstly, the economy is growing strongly, though it recognized that business investment has moderated from earlier in the year. Secondly, unemployment has trended lower. In reality, no new info or light was shed thus; the Fed will continue to gradually raise interest rates. Having said that, why did the USD go up after the announcement? The answer is twofold. The USD was original sidelined due to the US mid-term election and the uncertainty of a December rate hike was lifted.  Speculation that the Fed might want to keep its options open after the October drop in stocks and oil prices. Instead, the Fed continued to categorize growth and employment as strong and gave no indication that it would cave to President Trump’s Fed rhetoric by giving any indication that it intended to slow the pace of future rate hikes.

Finally, it wasn’t a good week for the CAD has it shed 0.82% against the USD and fell to a four month low, making it the weakest of the major currencies last week. There was talk that Canada wasn’t happy with some of the final language in the new United States-Mexico-Canada (USMCA) trade pact. There were also reports that Prime Minister Justin Trudeau won't appear alongside US President Donald Trump to sign the USMCA unless the ongoing steel and aluminum tariffs were lifted. In the end, it was the steep drop in oil, Canada’s most important export that weighed heavily on the CAD. The price of oil has crashed more than 20% after reaching a four-year high in early October. Crude has fallen for ten consecutive sessions taking the price below $60 a barrel for the first time in seven months.

Technically, the USD/CAD rate has broken above the 4-month bearish channel while forming a new bullish trend line (green line). The momentum indicators are also aligned for more gains. The next target would be September high at 1.3220, followed by the July high of 1.3290, and the June high of 1.3385 - one step at a time. 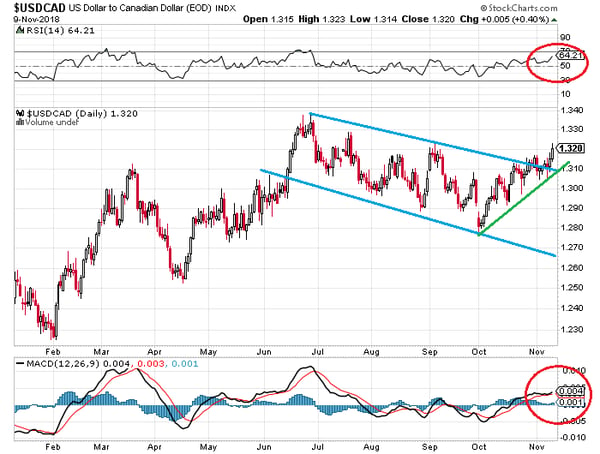